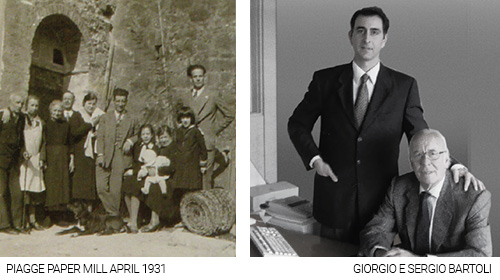 The history of the BARTOLI paper mill begins in the late nineteenth century when the first dry-aired paper was produced by the family in Villa Basilica, a village between the provinces of Lucca and Pistoia, the centre of paper manufacturing since the fourteenth century.

Investments in machinery and tools of the time were made year after year until, just after the second war, Bartolo Bartoli and his young wife Adelina moved to the nearby city of Lucca, founding a more modern paper mill in terms of technology, organisation and size. Having reached the fourth generation, their three sons built a new system, the PM1, in the current headquarters in Carraia in 1974, which was state of the art in the manufacturing of special cardboard intended above all for the office paper sector.

Ten years later, in the same spirit that has always guided them, they built a new production plant, the PM2, intended for a new market: shankboard for footwear, which makes the company known in over
80 countries.
A new investment was made in 1990, the construction of the third line, the PM3, with which the company will achieve a daily production capacity of approximately 70 tons over time. Another speciality of the company in the footwear sector arose with the project of the PM4, a new production line dedicated to a decidedly innovative fibre with its high physical and mechanical properties: DURALITE®.

The BARTOLI paper mill now puts itself forward with a group of trained, motivated and creative collaborators. The various company departments regularly interface with one another to tackle the Research & Development and Problem Solving for an increasingly demanding and careful market, divided into different types of product sectors.
Depending on these essential values, the quality policy of BARTOLI is: